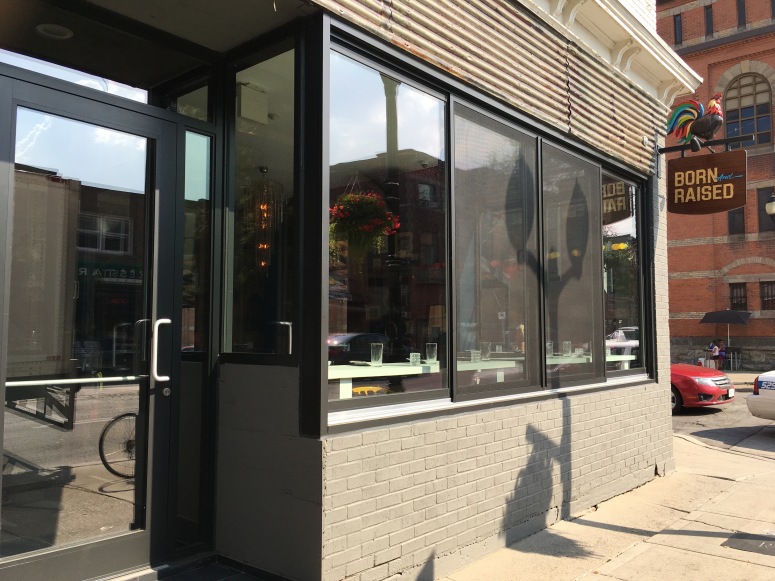 There was a lot of buzz last night since the news hit social media that Born and Raised was ready for their soft opening, Friday, July 8 at 5:00 p.m.  A small group gathered outside (myself included), waiting patiently for the time to arrive and the door to open.

Instead, we were told there was a bit of a delay and to come back in 45 minutes.  The restaurant opened just after 6:00 p.m. to an anxious and very hot crowd.

To say the restaurant didn’t disappoint is a very big understatement.

The staff was very friendly and attentive.  Our server was wonderful.  Understandably, there were some opening night glitches, including the fact that our food order for some reason did not reach the kitchen.  Our server apologized repeatedly, and in an effort to make things right the manager came over to our table to apologize personally and asked us if we would like to try the oysters (which happened to be one of two things we did not order).  Trying to hide the fear in my eyes, I said “sure!”.  I had never eaten oysters and shared this with the manager who assured us we would be converted.  After some instructions, which included telling us to chew the oysters (which flew in the face of everything I was ever told!).  We were full of anticipation.  The manager shared that she was an oyster shucker and would walk us through the process.

The moment arrived.  The plate had oysters on the half shell.  I have to say, they didn’t look too bad, I could do this!  More instruction were provided including the manager’s suggestion to squeeze some lemon juice on them and sprinkle with salt.  We tried the garnishes offered (both had a bit of kick, but equally tasty).  My son and I went for it and to our delight we were blown away!  We both greedily finished the oysters in record time.  Both of us are now BIG fans. 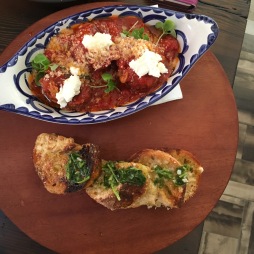 The rest of the food was delectable and delicious.  We had the meatballs, margherita pizza and ceviche.  Everything was fresh and very flavourful.  We could see the pizza oven from our table, which is very entertaining.

The chef/owner Vittorio Colacitti was a contestant on Top Chef Canada and being a big fan, I couldn’t wait for his restaurant to open.  We had the pleasure of meeting his mother, Susan who wanted to ask if we enjoyed our food, she was so nice!

The restaurant was buzzing all evening, benefitting from the large Art Crawl crowds out enjoying the warm summer night.  If you are looking for an awesome dining experience, check out James St. North’s latest restaurant, Born and Raised….and try the oysters!